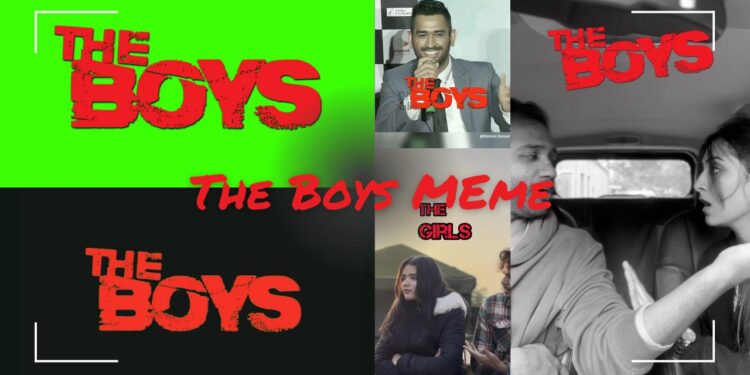 As we scroll through our social media feeds, it’s hard to miss the viral sensation that is The Boys memes. They’ve become a topic of conversation among friends and a source of endless entertainment. The latest trend of The Boys Meme Reels on Instagram and TikTok, set to the catchy beat of Imagine Dragons’ “Is This Entertaining” from “Bones,” has taken the internet by storm. The clever use of text overlay of “The Boys” on punchline moments of the videos, adds a whole new level of humor to these memes. Let’s dive into the world of The Boys memes together and see what all the hype is about, and how to download The Boys Meme Template to create your own The Boys Meme.

What is The Boys Meme?

The Boys Meme is a trend on social media that takes the intro logo originating from the Amazon Prime series, The Boys, and pairs it with the Imagine Dragons song “Bones” or “Is This Entertaining”. These memes use the show’s title, “The Boys,” as a way to make relatable jokes about the antics and behavior of young men. These memes are a lighthearted and fun way for fans of the show to connect and share their enjoyment of the series.

The Boys Meme logo text with the meme song download, and create your own version of The Boys Meme. The Boys memes are funny videos and memes using the “The Boys” text.

The Boys Meme Song “Bones” is also known as “Is This Entertaining” by Imagine Dragons download.

The Boys Meme Template video of the Intro Logo Text “The Boys” from the Amazon series The Boys attached with the song “Bones” or “Is This Entertaining” by Imagine Dragons.

We’ve gathered our favorite picks of The Boys Memes just scroll and watch to take inspiration from them to create your own The Boys Memes.

And that’s it! Now you have successfully saved the boys meme onto your device.

How to make your own Boys Meme?

If you’re one of the many people who can’t get enough of The Boys Memes, then you’re in luck! We’ve put together a handy guide on how to use The Boys Meme Template.

First things first, head over to our website and download the Meme and Meme Template both. Once it’s downloaded, open up your preferred video editing software and create a new project.

In your software, create a composition of your preference and open the video you want to edit. Then, add our meme or our meme template as an overlay.

Once you’re happy with your creation, save it and share it with all your friends!

The Girls Meme is an alternate version of “The Boys Meme” above just with a slight change, instead of the word “Boys” it’s “Girls” becoming “The Girls” meme. Scroll to download The Girls meme and meme template green screen video to create our own The Girl Memes.

Memes are a great way to show off your sense of humor, and the wide variety of The Boys memes available makes it easy for you to find something funny that fits your tastes. So go ahead – start downloading some hilarious The Boys memes today and get ready to have a good laugh!