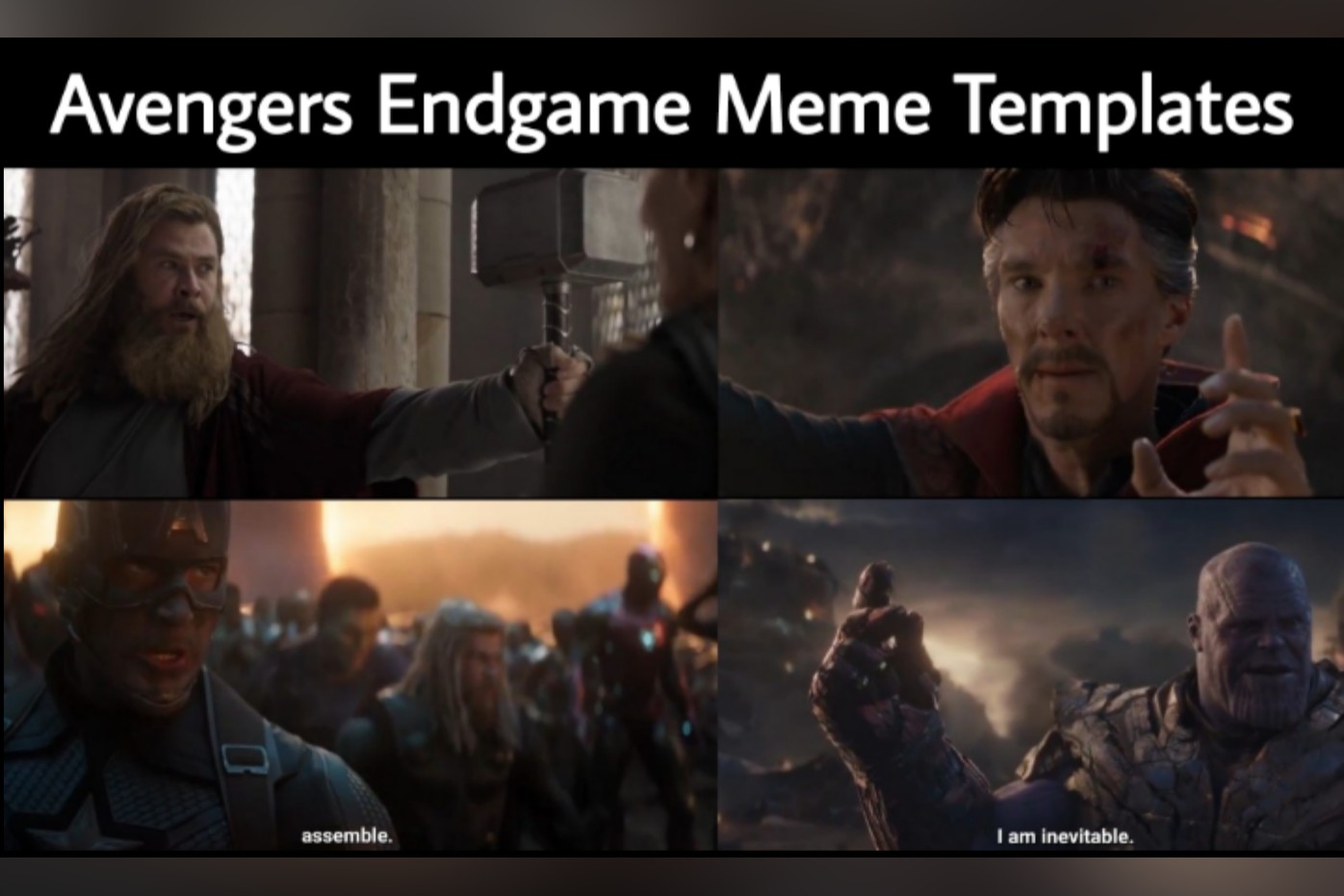 Here’s our collection of Avengers Endgame meme templates. Check it out here but before that have a quick introduction with this superhit movie.

Avengers Endgame is one of the precious movie of MARVEL COMICS franchise. Released in 2019, it is actually a Superhero movie involving various superheroes, super heroines, super soldiers and obviously an alien villain from another universe.

AVENGERS ENDGAME is sequel of THE AVENGERS (2012), AVENGERS: AGE OF ULTRON (2015) and AVENGERS INFINITY WAR (2018). It was 22nd film of the Marvel Cinematic Universe. The budget of this movie was 356 millions in USD ; one of the expensive films ever made.

The VFX graphics created in this movie is of great extent.No need to say it was one of the most awaited movie from all over the world.

I see this as an absolute win

Avengers is a group of Superheroes which involves –

The story starts after  23 days of Thanos’ “SNAP’’ by Infinity Gauntlet.Half of the Universe Population was vanished by power of Infinity stones. And he went back to his own place “Garden of Thanos”. After that Captain Marvel aka Carol Danvers got emergency signal by Nick Fury and came back to earth to help Avengers.She saves IRON MAN and NEBULA from abandoned space ship from very far space.After their rescue and health recovery, with the help of Nebula, the Avengers locates location of Thanos and attacked him.Aggressive Thor targets his head and kills him. They found that after fulfilling his plan he had also destroyed the Infinity Stones for the sake of others in case anyone again try to use those stones for selfish desires.

I think i lost you

Don’t do that,Don’t give me Hope

Time period changes and after 5 years, accidentally Scott Lang escapes from Quantum Realm.And after realizing the truth and horrible effect on humanity by SNAP, he met rest of the Avengers.And they find that the time period on Earth and Quantum Realm is passing at different rate. The 5 years duration of earth seemed like only 5 hours to Scot.

Where did you get this ?

I can do this all day – Avengers Endgame Meme Template

Captain America figthing with Himself

So in order to reverse the SNAP and bring back the humans, the Avengers plan to do REVERSE SNAP.The experience of Ant Man gave them concept of Time Travel.Bruce Banner: the HULK along with genius scientist with the help of Tony Stark built time machine and after experiment they plan to take all Infinity Stones from past, use them to reverse effect of snap,and put them again in their original timeline as it was taken.

I can do this,I can’t do this

Thor and Rocket giving Thumbs up

After that, Thanos Captures Nebula from Future on Morag and extract all information from her.About the Avengers and their plan to use of Infinity stones.Avegers, with all Infinity stones come back to their own timeline.And Hulk choose to do the Snap to make all dead people alive again.He becomes successful and all people become alive again.

Meanwhile, at same time Nebula from 2014, sneaks at their base and by using their Time Machine. She also calls Thanos with his Army. A ferocious fight happens between them.And then Doctor Strange with his Sorcerer army joins the battlefield.So, by using his portals he also brings Wakandian army, Restored Avengers, Guardians of Galaxy team and Asgardian army on the battlefield.

The actions scenes with VFX is impressive and chlling both.Moreover, in the fight of Thanos with Captain America and Thor. When Captain lifts the Molnar, the weapons of Gods,that moment was lit.In addition, when Thor along with his Stormbreaker. And Captain with Hammer fights violently with Thanos and nearly defeated him.Entry of Captain Marvel was also impressive and powerful.She went head to head fight with him.She didn’t won with him but gave time to other Avengers to capture Infinity Stones.

I found them all

I wanna see everything

But sire it will kill us all……just do it.

Iron man with his nano tech suit and gauntlet captures all mighty stones.And wield them in his hands.After that, by getting signal from Dr Strange he understood that to kill Thanos and his army to save Avengers and Humanity he had to snap again to kill Thanos along with his army. Thus, he sacrifices himself as he wasn’t capable to bear the Gamma Radiation emitted from gauntlet.

Well the movie was action based.In addition, there were many funny moments and  dialogues in it. After its release various meme were circulated on all social sites which again showers the audience with curiosity.Moreover, it became a hit in the history of CINEMA.

Is that everyone ? – Avengers Endgame Meme Template

You have the little one – Avengers Endgame Meme Template

I don’t even know whow you are.

NO, I don’t think I will

So I hope you liked our collection of Avengers Endgame Meme Templates. For more latest and best quality meme templates, Stay Tuned with us.